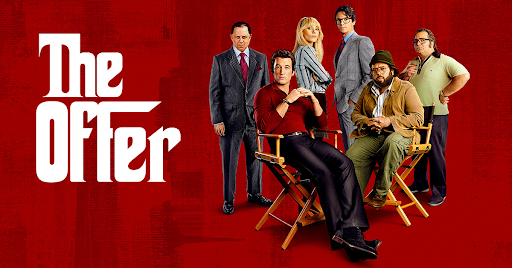 As Founder of a digital consultancy, it’s my job to drive continuous improvement for everyone involved in our business, from my internal team and colleagues to clients and the customers they serve.

I think about this mission all the time, even when I’m “off-duty” on evenings and weekends. And recently, I found incredible inspiration from The Offer, a Paramount+ series about Oscar®-winning producer Albert S. Ruddy’s extraordinary experience of making The Godfather.

Full disclosure: I get absolutely nothing from Paramount for mentioning their show. Like millions of others, I consider The Godfather one of the greatest films ever made. While thoroughly entertaining and fascinating, The Offer isn’t that caliber — the mixed reviews are fair.

However, as a story about creating not just profit, but a meaningful contribution to your industry that has longevity, impact, and importance, it’s a must-watch for project managers and product managers, in my opinion.

In this article, I’ll tell you why. Spoiler alert: The famous lines from The Godfather, “It’s not personal, Sonny. It’s strictly business,” can be words to live by, but in many cases they can hold you back. Sure, it’s business — but when your business is something you value and personally invest in, you reap the benefits. The true story of how Ruddy was instrumental in bringing the iconic film to fruition (on a budget of just $7M that went on to gross around $290M today) has lots to offer to ambitious project leaders, so let’s dive in.

Leave the Gun, Take the Cannoli

Ruddy, as portrayed by Miles Teller, is an inspirational character. He started his career as a programmer for the Rand Corporation but was always a creative spirit. His combination of vision and ambition led him into entertainment, first as a writer and then as co-creator of the TV show Hogan’s Heroes. That credibility gave him the confidence to move into producing. In The Offer, he legendarily parlays a relatively thin resume into the role of producer for The Godfather.

Now, what does a producer actually do? Much like a product or project manager, the answer is pretty much everything. They have all of the balls in the air, juggling the needs and concerns of everyone involved, from the creatives to the engineers and technicians, talent, administration, management, external interests, and other stakeholders.

From the get-go, despite his relative inexperience, Ruddy was a masterful juggler, all about focus and determination. He had a “do whatever it takes to win” approach, which was tested multiple times throughout the production.

Here’s the takeaway from Ruddy: “whatever it takes” means making good decisions and knowing what will make or break a project’s success. You’ve got to be able to say “no” and be smart enough to realize when a yes is worth breaking your back for.

It’s all about priorities (aka the cannoli).

Ruddy’s first priority was creating something meaningful and lasting by helping other talented people realize their vision. Think about it — did you know Ruddy existed before you watched The Offer or read this article?

You likely did not, although you certainly knew some of the other names, like Francis Ford Coppola (director), Mario Puzo (writer), Bob Evans (Paramount studio head), and, of course, actors like Marlon Brando, Al Pacino, James Caan, and Diane Keaton.

Ruddy might not have been a big name, but that wasn’t his priority. Fighting tooth and nail for everything that the people envisioning, building, and directing the production needed was his single-minded focus. Without his persistence, curiosity, and incredible problem-solving abilities, The Godfather would have never been made. And the seismic shift it created in the entertainment industry might not have happened.

Ruddy’s drive, dedication, and willingness to be “second greatest at every role” to get sh*t done was inspiring. And his underdog spirit (as a very inexperienced producer) fueled the greatness of it all.

Another aspect that Ruddy embodied is empathy. Over and over, he actively listened to the things people were passionate about or stuck on, and he responded to them — no matter what. Whether he was exhausted, worried, frustrated, or pissed, Ruddy never let it get in his way or affect his relationships with his team members. He kept calm and, even in the most dire circumstances, carried on.

Ruddy understood that it was his job above all else to keep the machine driving forward — a critical perspective for project managers. I always like to say start with the outcome and work backward. What does your team need? Your client? Any other involved stakeholders?

One thing that really bugs me is how seldom I see project managers taking genuine interest in both the people and the things that they are managing. How can you possibly be effective in managing something if you are just checking boxes. True project management is a superpower and not an administrative only function.

By talking to people and spending quality time with them — say, breaking bread with them — you start to understand their whys. That insight helps fuel your ability to figure out the hows.

For example, it was a major struggle with Paramount to cast relatively unknown theater actor Al Pacino as Michael Corleone. In The Offer, Coppola drew an allusion to Vincent van Gogh, who needed the correct shade of yellow to paint sunflowers to express how important Pacino was to his palette of actors. Pacino was his yellow.

Through numerous battles, Ruddy (finally) got the green light for Pacino, and the rest of that saga is history.

Another example was how Ruddy got the real mafia to cooperate with the production being filmed in New York. Worried that the film would negatively portray Italian-Americans, mob boss Joe Colombo (played by Giovanni Ribisi) did his best to halt production. At a nerve-wracking meeting, Ruddy found out that the biggest concern was the use of the word “mafia.” He assured Colombo the word or any related term would be taken out of the script and held to his promise — and got Colombo’s full support and assistance over time.

By actively listening to Colombo’s objection — no matter how scary or intimidating it was to hear — Ruddy got what his team needed.

The moral of the story for project managers is to sweat the details and be meticulous with honoring agreements and explicit expectations, and you’ll get what you need, when you need it, for the outcome you’ve envisioned.

The Benefits of Being Connected

At the heart of those two anecdotes is something we hold up at the core of my company’s values: the importance of caring greatly. It’s the glue that connects us, not just in our personal lives but professionally too.

As I always say, people don’t remember awards or projects; they remember who they encountered or collaborated with and how that person made them feel. These are the bonds that connect (or not) teams.

Certainly, Ruddy’s relationships kept him going — even when he was briefly fired from the project. His assistant, Bettye McCartt (played by Juno Temple), wasn’t a lowly assistant to him. Instead, Ruddy treated her like a valued partner with an equal stake in the film’s success. And on multiple occasions, her contributions bettered the project and even saved the day.

Moving beyond the workplace, there’s loads of research that supports the importance of friendships. People who live in the Blue Zones — for example, Sardinia, Italy — enjoy much longer lives thanks to close relationships with their family and friends. Considering work is the sum total of our days, being friends and even feeling like family with coworkers and close clients and colleagues is a game-changer.

That goes for people you don’t see eye-to-eye with, like Ruddy and Colombo. By keeping an open mind and listening to each other, they made space for respect to take root and a friendship to grow.

In fact, supporting the health of interpersonal relationships in the workplace is something my team and I prioritize with a framework called “The Four Green Lights.” The key aspects are:

Team satisfaction: We care if everyone is happy, healthy, and able to prioritize the things in life that truly matter, like family.

Client satisfaction: We genuinely care about our clients’ challenges, so we focus on active listening so we can solve their actual problems and deliver the best possible outcome. I pride myself on delivering what my clients actually need, which is often not the things that they ask for.

The impact of the work: We never see what we do as a one-off; we work hard to build relationships with the intention to create products and outcomes that stand the test of time. If we aren’t driving ROI I’ll fire us before the client does. We serve our clients business goals and that is how we design demand.

Profitability: Making money is, of course, critical to sustaining operations and keeping the band together but it’s not a goal. It happens naturally as long as we have a green light for the first three KPIs in the Four Green Lights Framework.

As I watched The Offer, it seemed to me that Ruddy followed a very similar framework. Producing The Godfather wasn’t just a job to him; it was a commitment he made.

What that work ethic, dedication, and persistence offered Ruddy wasn’t what you’d expect — he didn’t go on to produce The Godfather Part 2. (You’ll have to watch The Offer to find out why.) Suffice to say the experience offered him something far more valuable: creative freedom and the courage and fortitude to stay forward-obsessed.

Now that that’s an offer any project manager should never refuse.

If Ruddy’s approach resonates with you and you’re a project manager, I’d like to talk to you. Who knows, I might just make you an offer you can’t refuse… so hit me up in the comments or DM me on Twitter.

Introducing the Green Zone Framework to Optimize Your Work & Life

AI art is more than a party trick. Use it to work fresh creative magic.

How to Say No to Work, Even in Hard Times